When Christy invited me to Cancún in December, I had to think before I could answer. I am never one to turn down a trip, much less a partially paid for trip, but a few thoughts did run through my head. First, I had to wait and see if I was going to have a job interview that would potentially be in the Cancún trip timeframe (I didn’t). Second, would I ever actually see Christy, or since she had a conference, would I be alone most of the time? Last, would this be just like Las Vegas or Disney World, fabricated playgrounds built so Americans could escape and spend loads of cash? And what exactly did all-inclusive mean anyway? Was it a sham, or would it be brilliant? As with everything, I needed to find out for myself.

I arrived in México about four hours after Christy, and my premonition that I would be vacationing with a bunch of sun-seeking Americans immediately proved true. Not that I mind that, but when I go to Mexico, Italy, Iceland, England, Canada, etc., my personal interest is in interacting with the locals. So no sooner had the Mexico stamp ink dried on my Passport, I told myself I was going to need to venture out from Zona Hotelera (tourist area) sooner rather than later.

I am fairly certain that going to fancy country clubs does not qualify as interacting with locals, but a day without golf is like a day without air, so first things first. Right now, one of my favorite things to do is head to a new golf course and take it all in, sharing my golf story and listening to others’ throughout the day. One of the side effects of being houseless, jobless, and playing golf 200 days last year is that most people, from the clubhouse waiter to the cart guy to the millionaire CEO, become interested. How? What? Why? To be honest, I’ve grown a little weary talking about myself, so I try to shift the focus. Where are you from? Do you have children? What do you and/or they like to do? 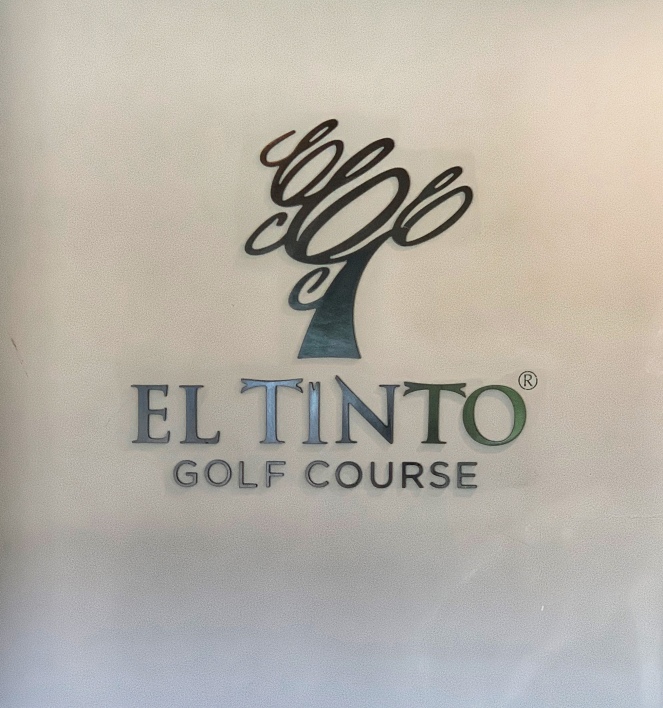 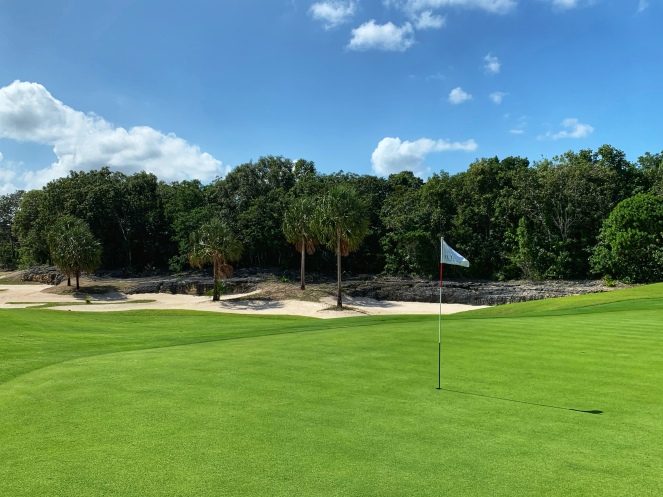 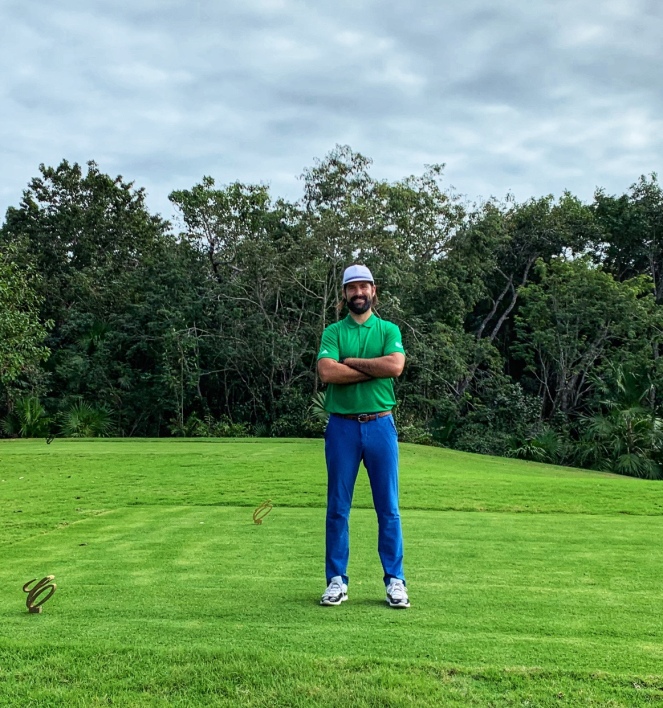 On Thursday, I played 36 holes at El Tinto Golf Course at Cancún Country Club, and on Friday, I played 18 more at Riviera Cancún. I do not know if it was the time of year, windy conditions, or something else, but I pretty much had both beautiful courses to myself. This would make some people lonely, but not me. This gave me free reign to play quickly and also to talk to every single local Mexican citizen that I could. Tell me about your family. Tell me about your favorite things to do. Tell me what makes you happy. Tell me why it is so 🤬windy. 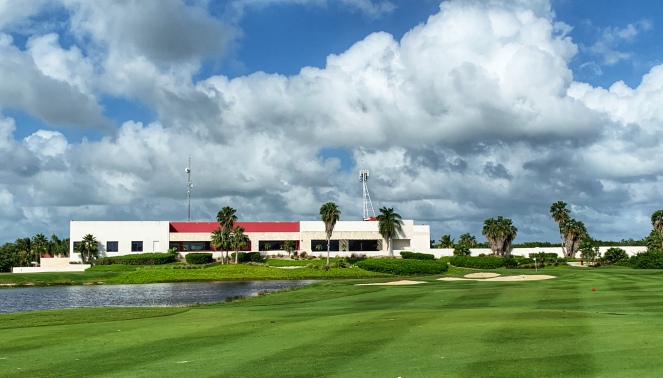 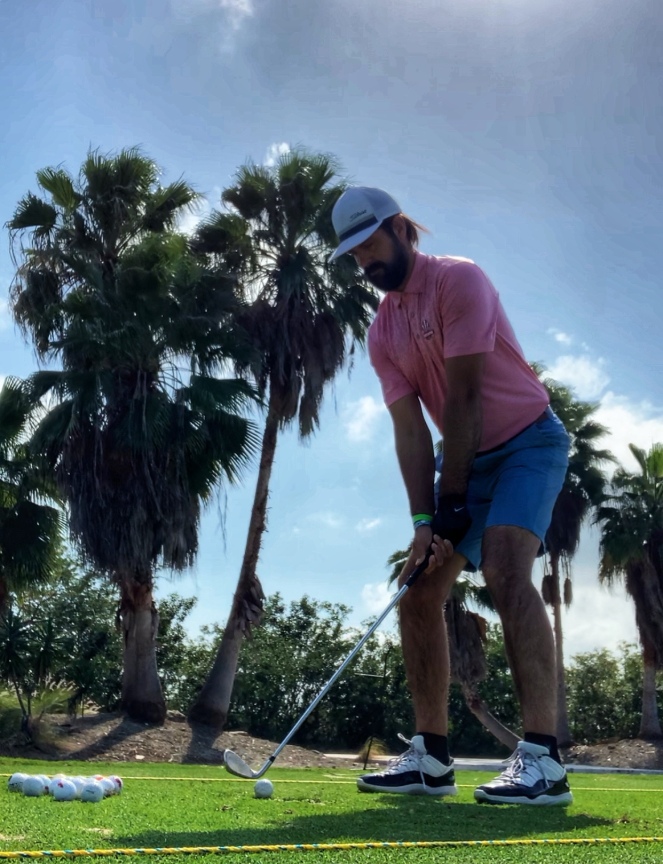 The wind really was a dilemma both days. A random coin toss had a 50/50 chance to tell me which way the 40mph breeze was blowing, if said wind didn’t blow the coin away first. Needless to say, I left more than a few balls in the Mexican jungle, although I was quite pleased with my play for the majority of the 54 holes. 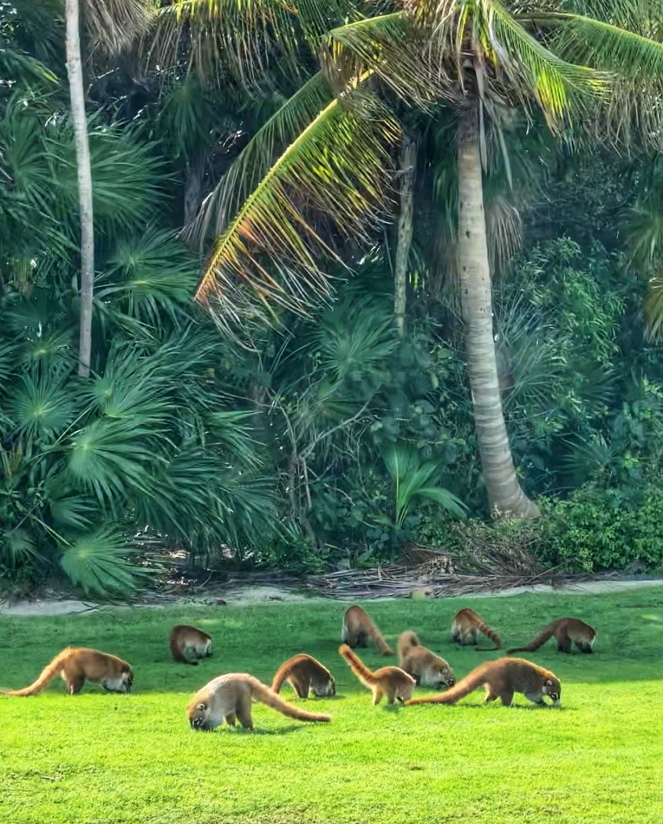 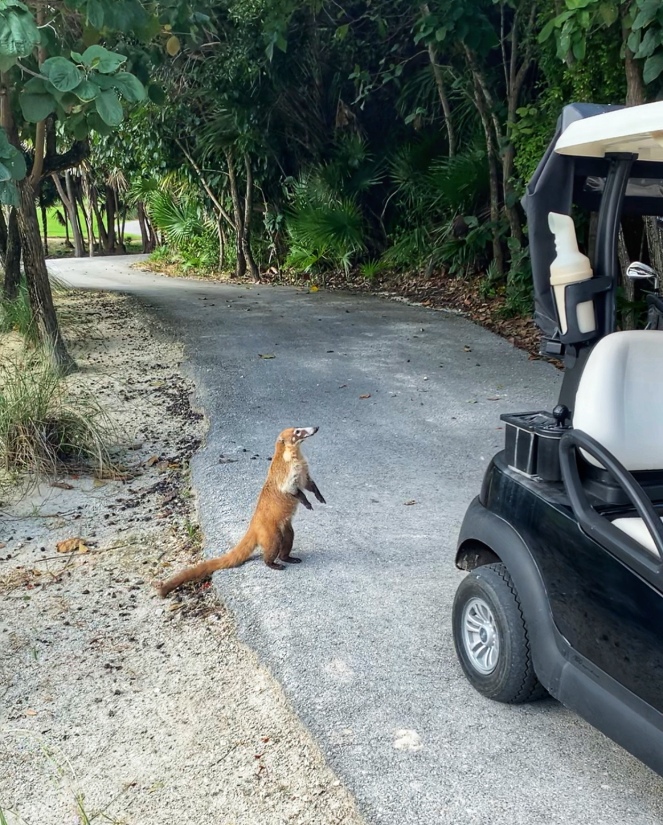 Speaking of the jungle, I really didn’t have the course to myself. Iguanas, colorful birds, and a special treat, protected coatis that tried to hijack my cart, were gallivanting all over the place, reminding me of my tiny place in the universe. The only thing missing were crocodiles and monkeys, or else I would have been completely smitten. 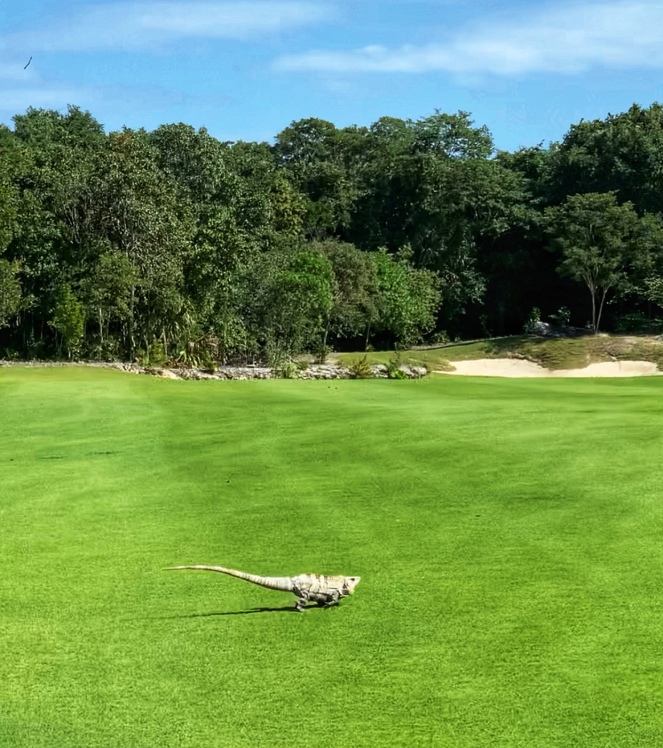 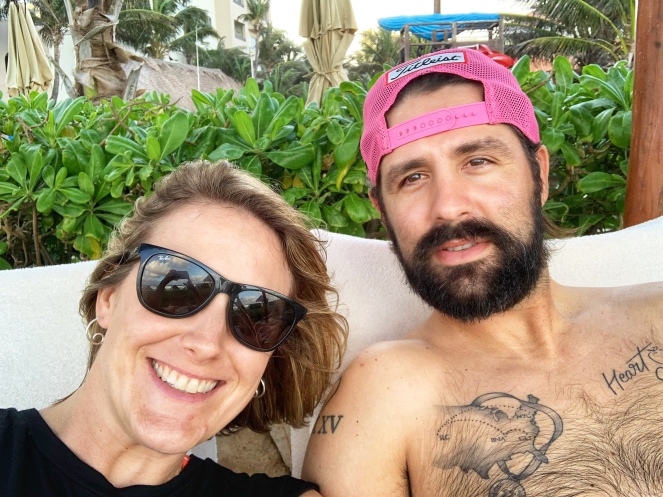 My favorite moment with Christy, no matter how brief, was lunch on Friday at La Cevichería, an open air bar and fish taco joint overlooking the massive waves crashing on the beach. She had a brief break, so we enjoyed fish and shrimp tacos, shrimp cocktail, and piña coladas midday. (As with everything I do these days, this further reinforced my desire to live, work, and play outside.) 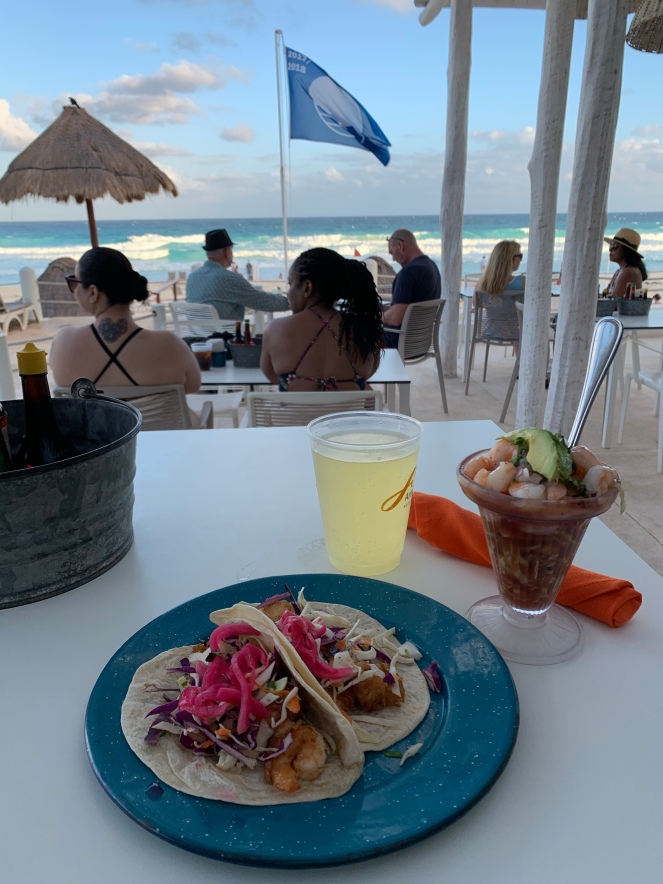 I did experience one disappointment just prior to the trip. Atlante FC, the second division Mexican soccer team based in downtown Cancún, was scheduled to open their 2020 season Friday night at home. Leading up to the trip, I was buzzing. There is nothing I love more than taking in a game on foreign soil and immersing myself in the usually colorful local game day traditions. However, a couple of days before, I noticed that the game had been postponed and the season would not start until the following week. Damn. Oh well, nothing I could do about that, though I wanted to call the league and plead with them to change it back.

Instead, on Friday morning, I hopped a cab to downtown to go explore Estadio Olímpico Andrés Quintana Roo for myself. We arrived at the stadium and pulled into the parking lot, only to be greeted with locked gates and an unimpressed security guard. I told my cabbie that I would not be able to effectively negotiate a trip inside with my mediocre Spanish, so I kindly asked that he do so on my behalf. He agreed, and asked me to wait in the car. A moment later, he gave me the universal head nod and smile, and I leapt out of the car like an overexcited teenager on a first date. I asked my driver to hold tight, and then I thanked and greeted the security guard with a warm American howdy. “Gracias. Hola. Buenos dias.”

He walked me down to row 1, asked for my Passport, and then in a myriad of quick, short, and very direct Spanish phrases basically said, “Behave, or else.”

Misbehaving in a downtown Mexican city is not recommended, so I indeed behaved. He allowed me to feed my love for stadium architecture, taking in the wild, bright colors of this particular venue. I breathed it in, took some pictures and videos, and then was on my way. 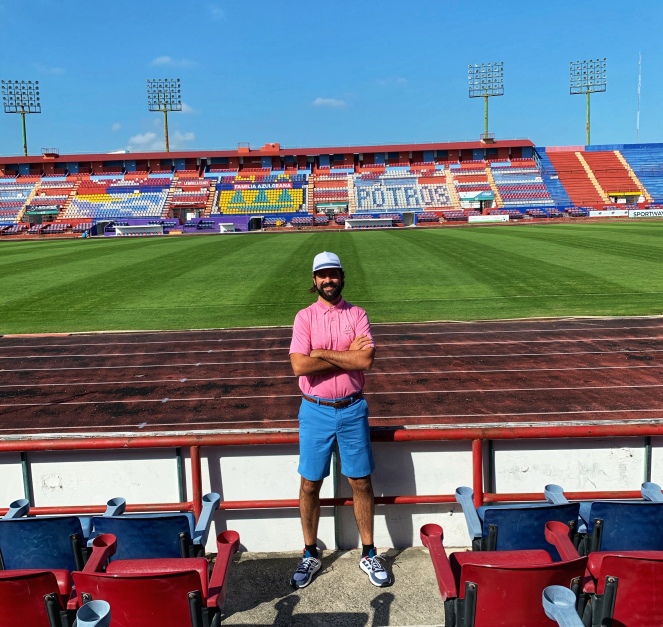 But before I left, I had one more thing to do. In as quality of Spanish as I could remember from high school and college, Mexico City and Tijuana, I turned to the gentleman and thanked him. I told him he didn’t have to do this, and that it made my day. He visibly perked up, smiled, and we talked for a minute. I told him I behaved, he laughed and handed me my Passport back, and I walked out of the front gate giving him a very personal head nod and smile. 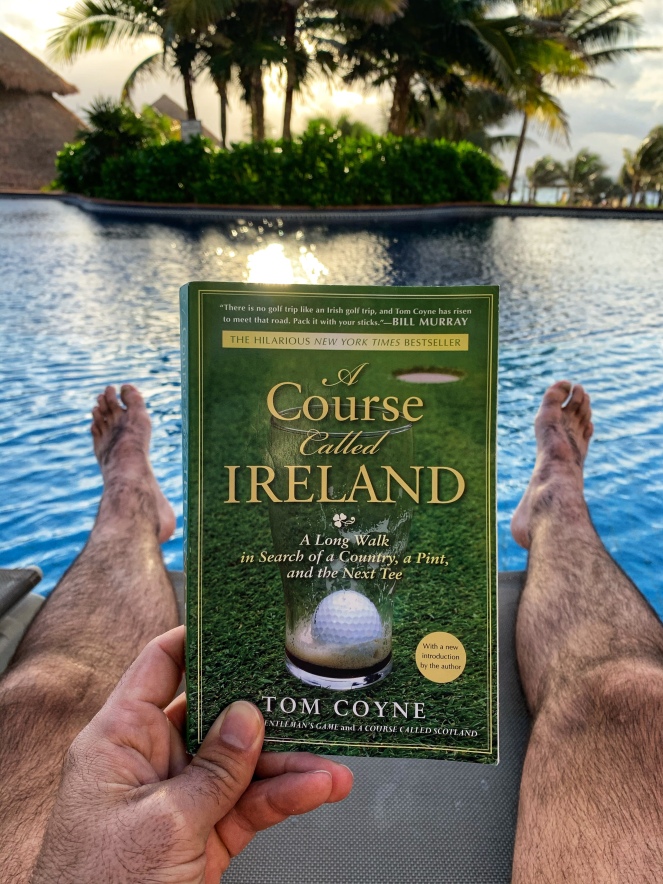 I never stepped foot on the beach. I snuck in a quick read by the pool Saturday morning before the flight. I shared a handful of meals with Christy. But my trip, my memory of Cancún, will be the golf course attendants, cab drivers, and security guards that went above and beyond to help me have a really personalized, unique experience.

A good smile can say please (shout out Banks Bostic), but it can also say thank you. And I dropped a lot of the latters this week. These kind folks were my companions this trip, and they made it pretty darn good. 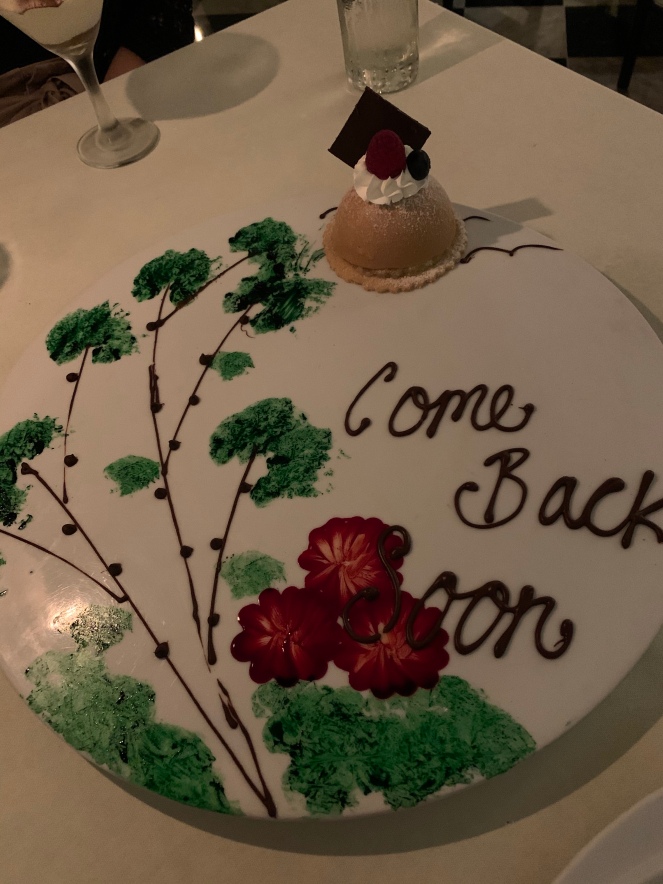