I wasn’t initially even invited on this Italy trip. It was a girls family trip that sprung out of thin air. Then randomly a few weeks later, they decided to open the invite to the boys of the family, and I was the only one to accept. So I ended up booking a separate flight, a separate hotel, and basically a separate trip to Italy. I would meet the girls for dinners and drinks, but otherwise we were legitimately on two separate trips to Italy. Sounds a bit unorthodox (like my general thought process), but man it was awesome! I do not have enough time to give you the full run down of the trip, so I am just going to let you in on last Sunday. 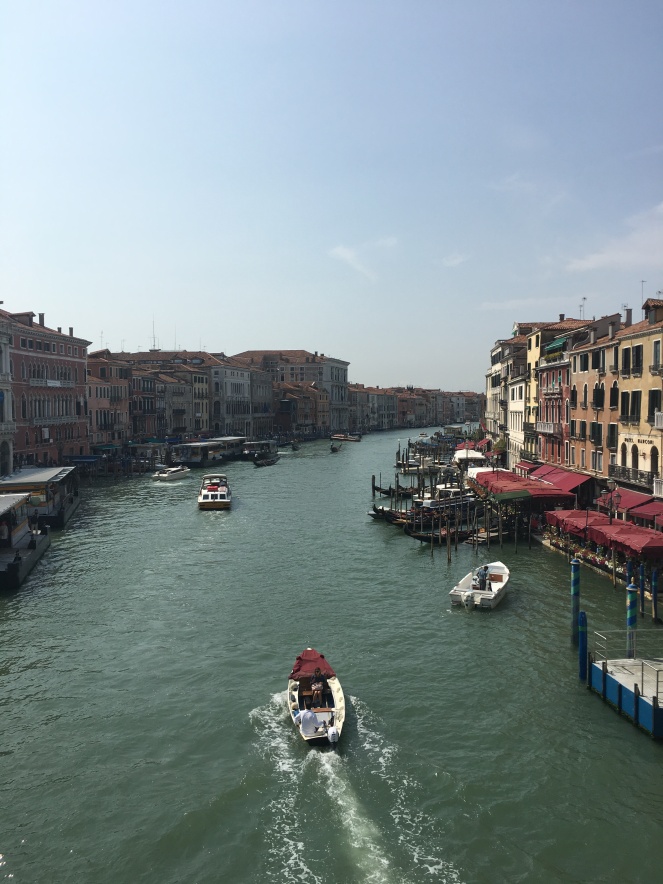 Let me first tell you how my brain works. When someone tells me anything, in this case “I’ve been to Italy and this is what you should do”, I immediately ask myself 4 things. Does this make sense? Is there a better way to do this? Are there options I haven’t thought about? Is this what I want to do? Someone was nice enough to provide a “Things to Do” kind of book about Venice, which was home base for the week, so I scanned it briefly to acquaint myself with the area, but I then put it away. I basically was interested in soccer, fashion, pasta/pizza, and red wine, so if there is a book club about that, sign me up! Otherwise, I like to write my own book, so that is what I set out to do while I was in Italy.

I woke up at 5:45am on Sunday morning after a late night of pasta and red wine, and set off to the Venice train station in the pouring rain. I had the clothes on my body, my wallet, my Passport, and most importantly, my phone charger. I wouldn’t be back to Venice for a day and a half, but that was part of the adventure. I bought a train ticket to Milan, where I was planning to watch the Inter Milan soccer game that kicked off at 12:30pm. So I got on the train, and some two and a half hours later, I was in Milan. It was about 45 minutes until kickoff, so I decided to jump into a cab with some other Italians headed to the game too. They quickly learned I was from America, and asked me from where. I told them North Carolina, and they started talking to me about whether Duke or UNC basketball was better (Duke, of course). The cabbie then proceeded to name every single player from the old time Celtics-Lakers rivalry, which was rather impressive. They then started singing and chanting at me as we got closer to the famous San Siro Stadium so I could get the full experience, which really put me in the mood. I offered to pay the fare if the other gentlemen would help me find my seat, and then I got settled in on Row 3 for a wonderful, wonderful experience I will never forget. Inter won 2-0, and I hit the team store for some goodies as I walked back out into the pouring rain. I had allotted about 2 hours to then take the metro to downtown Milan and check out the fashion scene and a couple of stores. That was a cool experience, partially dampened (no pun intended) by the rain. But soon after, it was time to get back to the train station to jump on a train to my next destination: Bologna. 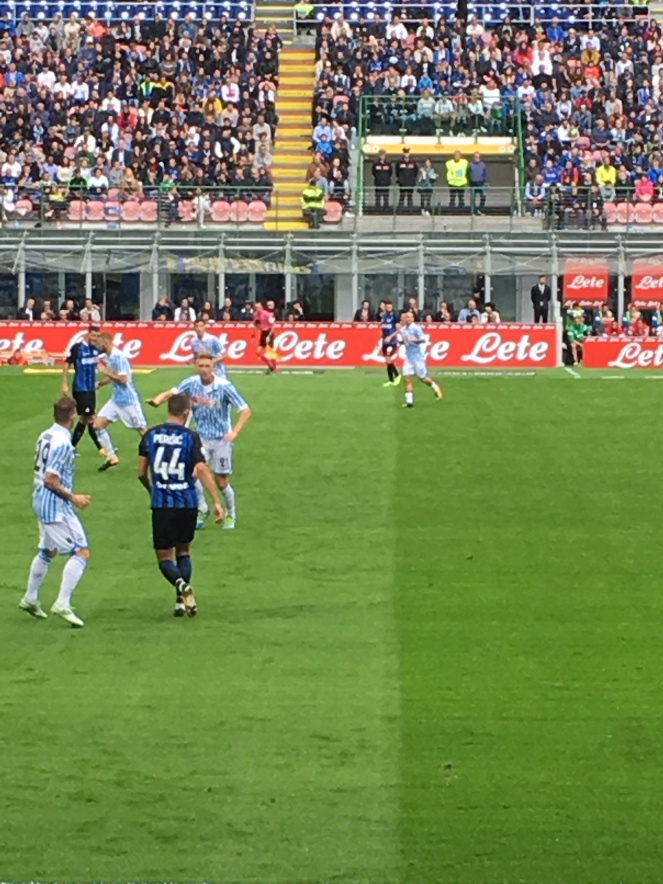 I arrived in Bologna about 6:30pm and the Bologna-Napoli soccer game was set to kick off at 8:45pm. Luckily it had stopped raining, and I immediately went and checked into a hotel smack in the middle of the town square. My plan was to get a cab to the stadium since it was about 3 miles away, but I got my second wind and decided to grab a couple of slices of pizza and walk with all of the locals down to the stadium, again to get the full experience. My impression of Bologna was that it was a middle class, blue collar kind of town, which was a little different from the posh Milan experience I had had a few hours earlier. Once I got to the Bologna stadium, I legitimately had no idea where my seat was. So I found someone who looked like they had been around the block, and he ended up inviting me to sit with him and his family, as long as I pulled for the right team. This game was my favorite experience of the entire trip. The fans were insane, rowdy, smoking, and singing the whole game (check my Instagram @benjbostic for the video). Bologna lost 3-0, but I could care less (don’t tell my new friends). It was almost midnight by now, and I had two things on my mind: more pizza and that the Panthers had just kicked off in San Francisco. I popped into a cafe and thought I was ordering 2 slices of pizza. I waited for a few minutes, and they brought me out 2 entire pizzas (gotta work on my Italian). So just picture this: it’s midnight in Bologna, Italy and some random American is carrying 2 full pizzas in one hand and trying to watch the Panthers game on his phone in the other! As I was almost back to my hotel, I saw a local walking his dog wearing a Charlotte Hornets t-shirt, and I couldn’t have gotten more excited. He thought I was an idiot.

I awoke Monday morning with no toiletries and wearing the same rain-soaked clothes I had been wearing for the past 30 hours (not my best fashion moment). I walked to the train station, grabbed a ticket back to Venice, and arrived back at home base around lunchtime. I walked back into my small Venice hotel, and was greeted by the concierge, “Someone didn’t come home last night:)” I tried to explain, but it fell on deaf ears. From that point on at my hotel, I was the American that never came home on Sunday night.

The Italian shopping was an excellent mix of high and low end. I bought 2 new ties: a lovely violet Hugo Boss and an exquisite navy and pink Kiton, the highest of high end. I bought some Nike training gear from the soccer games, and a handful of presents for folks back home ranging from scarves to handmade earrings to handmade cufflinks. I picked up a cool patch for the jacket I am making, 2 handmade glass bracelets, a handmade glass charm, and a pair of handmade cufflinks. It was roughly 10 pieces in all if you don’t count the Ferrari I got my son, and all 10 are just so unique. Italian style is so effortless, and I’m hoping to bring a little bit of that back to Charlotte with me.

If you take nothing else from this post, I want you to understand that there is no book on the perfect Italy trip or on life in general. Make your own path. I went rogue, and planned this 36 hour excursion by myself. I knew I was going to be dirty and exhausted when I finished, but that was okay. I knew there might be some twists and turns since I didn’t know the language, but that was okay. It turned out to be one of the most exhilarating and memorable days of my life, and I am so glad I did it. Classic risk vs. reward. Economics and Style 101.