At approximately 3pm this past Thursday, I stood on the 15th green of the venerable East Lake Golf Club in Atlanta, Georgia, looking over a birdie putt with my caddie Brian. The round had gotten off to a less than stellar start, but I had just birdied 14, so I was hyped. For those of you who don’t know, East Lake is the home of the PGA Tour’s annual season ending Tour Championship, and so the fact that I was even there was quite exhilarating. Walking where Tiger walked. Walking where Bobby Jones walked. And everyone in between.

As Brian and I read the putt, I said the following statement to him: “As absolutely perfect and extraordinary of an experience as this is, this isn’t even my favorite thing that I am doing TODAY!”

I hadn’t seen my son Banks in 25, yes 25, days. We were both running on FaceTime fumes, wanting to interact each day but knowing that our real bond lies within our ability to touch.

So I had set out an idea a couple of weeks ago to fly in to Jackson, Mississippi on Thursday, catch a ride with my pal Kris, and make the 2 hour drive and go surprise my crew. But as you know if you are doing any kind of living, nothing ever goes to plan. And that’s okay.

It was Mardi Gras last week, so airline ticket prices were jacked. My golf outing in Atlanta had gotten rescheduled 3 times due to cold weather. But contrary to the old me, I just let things fall into place and then made my final decision literally Wednesday night. Hotel in Georgia, enjoy the round, drive 6 hours to the Gulf Coast.

Everything eventually fell into place, with me barging through the doors at roughly 11:05pm CST to one person in on the secret, two people stunned, and a (not so) little boy that had already gone to sleep. I tried to wake him, but he sleeps like his mom, needing a bona fide national emergency to have any chance of rustling them.

I decided I would just cozy up to him so that when he did awake, I would be the first thing he saw. It happened about 5am, and it was glorious!

I was reminded via a conversation I had last Sunday that the vast majority of people will never get to play at places like East Lake Golf Club. Most people will never run the NYC Marathon. Many will never have the courage to explore Mexico City or the resources to trek across Northern Italy. I don’t take any of this for granted. 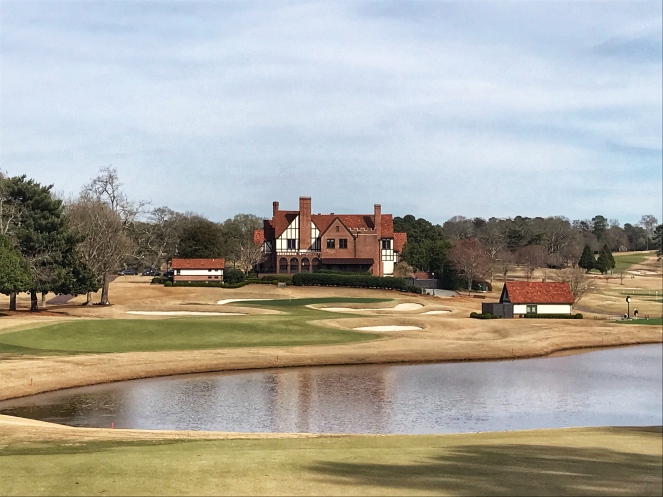 I have indeed done some wild stuff over the past almost 2 years, pushing every limit that I have and then some. It was fun, at times insane, painful, fulfilling, and rewarding. By my estimate, I travelled somewhere between 100,000 and 125,000 miles in this time period, doing and seeing everything and talking to and learning from anyone and everyone that I could.

But nothing, I repeat nothing, came anywhere close to the simple stuff: the hugs, the smiles, the chaos, and of course that first basket .

So when I made that statement on 15 green to my caddie, with the opportunity to make back to back birdies at the incredible East Lake Golf Club, he understandably needed further explanation. So I told him the situation. He flashed a mean smile, fist bumped me, and said “Yeah, this ain’t even close.”

Stay tuned for my final thoughts over the next two weeks, friends, and then a new chapter begins.