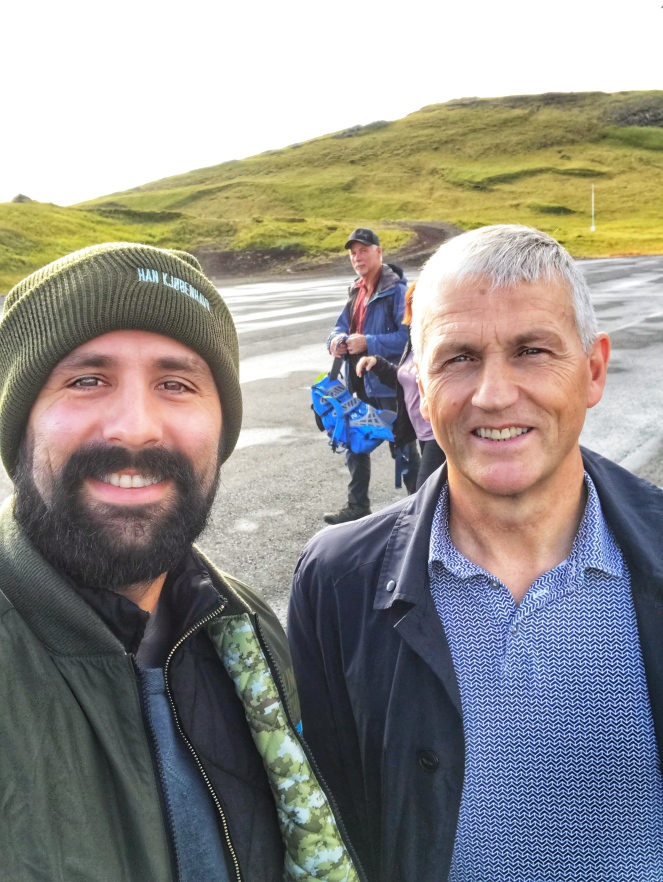 This story starts with a man named Gustaf, a quite striking, sixty something with an easy smile. Now Gustaf may not need an introduction in southern Iceland, but since I am not from southern Iceland, I did not know who he was. It just happened that he was my seat mate on the 20 minute flight I chartered from Reykjavik to Vestmannaeyjar Sunday morning. It just happened that he was a former professional footballer for Icelandic club IBV in their glory days. (He was also the former coach for the Icelandic club KA.) It also happened that he was quite tall, as am I. And so we were quite literally forced to get to know each other on the plane since we were basically sitting on top of each other.

The last time I was on a tiny plane like this, I vomited into my cashmere sweater. This time, thankfully, my stomach behaved. I was focused more on the stories from the late 70s and early 80s being told to me about the island, the soccer club, and quite frankly, anything. Before I could blink, we had landed in Vestmannaeyjar, quite possibly the most stunningly unique place on planet Earth. 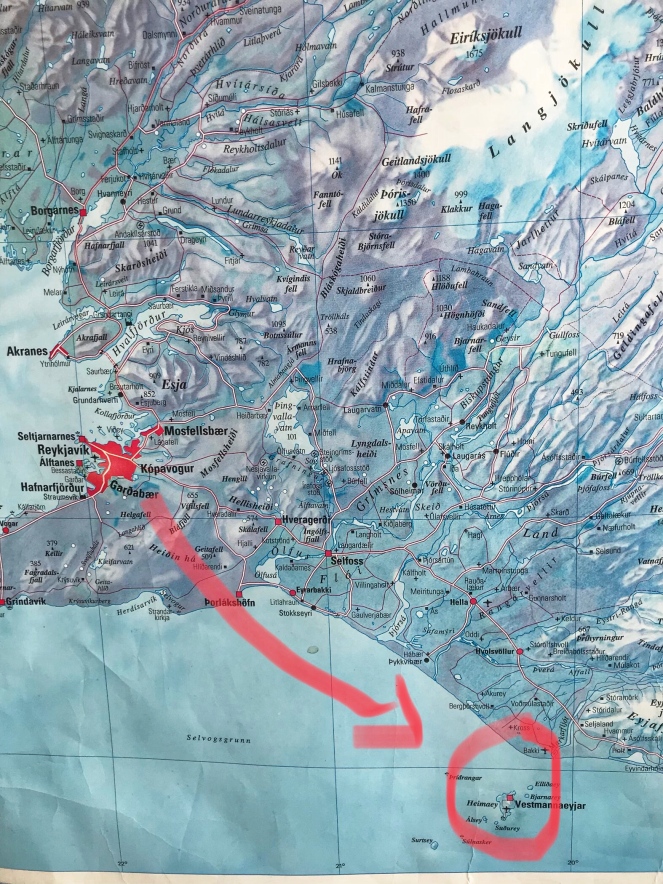 It is roughly 5 square miles in the middle of the ocean off the tip of southern Iceland, and I had arrived with just myself. No bags, no rental car available, no nothing. It was 2-3 kilometers to the center of town from the airport, and my new friend and his brother graciously offered me a ride and brief guided tour. As I genuinely crave authentic local experiences, I hopped right in and ate up all the stories that they regaled me with. An active volcano to the right. The fishing port straight ahead. Football stadium and golf course to the left. Was I even paying attention anymore? It was just so gorgeous. They dropped me off in the center of town, and we said our goodbyes. Maybe we would see each other at the football (soccer) match at 1400 (2pm).

I wasn’t planning on playing golf. But when I saw the course in person, I had to.

Give me an ocean, a volcano, and 18 holes, and I get weak in the knees. I walked into the clubhouse and asked if they had room for 1 player. The kind lady said yes. I then told her I needed clubs, a pull cart, balls, tees, food and drink. I also needed shoes and a glove, but they didn’t have those. It was like a hunting lodge that served as a golf shop.

It was the most memorable round I have ever played, primarily for the following reasons (also reference the pics).

I played in running shoes and 4 layers, constantly putting on and taking off clothes, depending on the weather’s mood.  The course was measured in meters, so I never knew how far I had. It stormed holes 4-7, but was absolutely picture perfect before and after.

My clubs were 30 years old. I had 2 sand wedges, a child’s pitching wedge, and no 9 iron. There were no riding carts. Only walking. Hole 16 took me over the Atlantic Ocean twice.

I shot in the 90s, unofficially. I say unofficially for the following reasons. I lost 2 balls on hole #1, a hole that has no hazards in which to lose a ball. Much less 2. I also have no idea if/how Iceland marks out of bounds. And I have no idea how to play a sand shot with pieces of lava in the bunker. 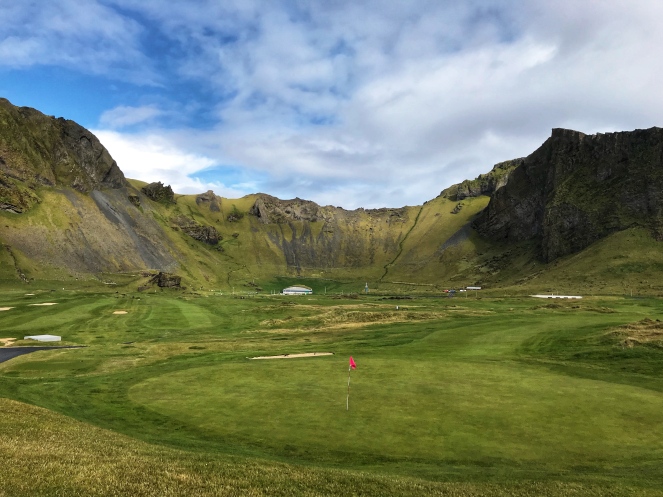 As I played the last few holes, I started hearing loud noises reverberating off the cliffs. I finished hole 18, quickly returned my stuff, and then walked about 50 yards up the street to the second half of the Icelandic Premier League football (soccer) game between local team IBV and Vikingur Reykjavik.

It reminded me of my hometown school Wingate University in North Carolina, minus the ocean and volcanoes. It had a few hundred people in attendance, and it had a small community feel. Kids were playing. Older men were reminiscing about days gone by.  The quality was decent, with the game ending in a 1-1 draw. The #10 for Vikingur and the #7 for IBV were quite enjoyable to watch. That is, when I wasn’t peeking right and stealing away glances at the magnificent scenery.

As I boarded the plane to head back to the mainland that evening, a random middle aged lady asked how I enjoyed the game. I told her it was fantastic, but more importantly, how did she know I was there? She said that her family had given me a ride into town earlier, and I just started laughing. I guess the little island doesn’t get a lot of dark skin, dark haired Americans every day, and word travels fast. 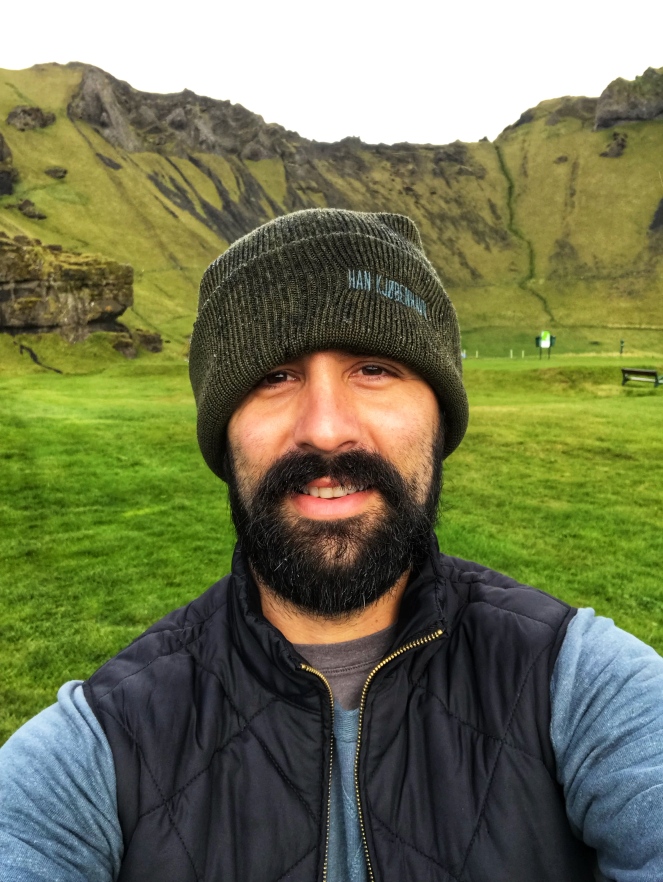 She told me about how the island was a great place to raise a family, which was a thought I had at the soccer game. I mentioned that from May to August, this place must be Paradise, with which she agreed. The other 8 months, I asked? Quite isolated.

The last time their volcano erupted was 1973. Her father was the fire chief, in charge of evacuating the entire island of 5,500 people in 2 hours via fishing boats. Gives new meaning to the terms fire chief and community, of which they made me feel a part of on this lovely day. 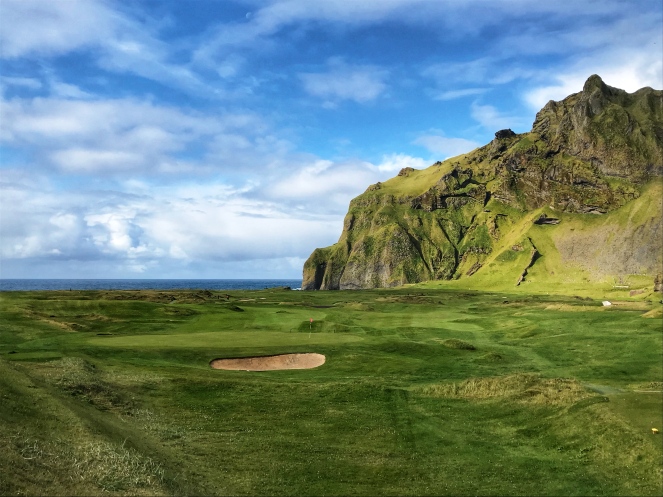 I am pleased to report that I have found the world’s perfect place. From May to August that is. A place that is welcoming. A place that is beautiful beyond words. A place, astonishingly, that was covered in hot lava just 45 years ago.

Have a great week. -Benj

6 thoughts on “Hitchhiking in Vestmannaeyjar”